ALL WE WANT IS A GOOD STORY: A Conversation with Kaj Tanaka 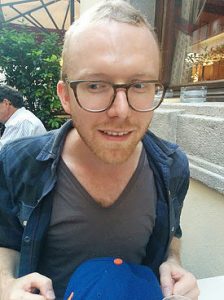 If you’ve never read anything by Kaj Tanaka, it’s only a matter of time. His writing has appeared in Electric Literature, New South, and twice right here at Split Lip Magazine, to name just a few. Like all good writing, Kaj’s prose can speak for itself. You’ll find that out soon enough. But before you do, a conversation with the author himself about music, faith, and the frills and fancy bits of storytelling.

Kaj Tanaka: Probably church music. My parents are Lutheran pastors and I was really into church hymns as a kid. I still like hymns a lot. I don’t go to church anymore, but I still find myself humming them all the time. Hymns are good like that–they were written to be carried around in our memories.

Here’s my top four church hymns in no particular order:

CW: They stick with you, don’t they? The harmonies are gorgeous. Do you enjoy writing about religious themes at all?

KT: Well I certainly don’t try to write about religious themes, and I wouldn’t consider myself Christian, but Bible stories are a big part of my literary consciousness, and since I grew up with those stories, I’ve spent a lot of time thinking about them. Bible stories tap into something deep in the human experience, which I find difficult to escape as a writer.

CW: Are there certain themes you find yourself tackling in your work more often than others?

KT: Kind of hard to say? Like I don’t set out to take on any themes in particular, and if I find myself writing about the same things repeatedly, I try to resist it. My feeling is that if I ever identify myself as “a writer who writes about X” I’ll end up only writing about X, which is an easy way to become a parody of yourself. So I’m sure I have themes that keep showing up in my stories, but I’m blissfully unaware of them, and I’d prefer to keep it that way.

CW: It’s important to recognize those patterns in order to grow and change. I think, in the same vein, that’s why a lot of bands become boring. For example, they write a great break-up album and then each one after feels like a diluted version of the original. Do you tend to seek out new music for the same reasons, to keep the curiosity alive? Do you get new ideas by listening to a wide variety of genres?

KT: Yeah, definitely. Musicians deal with the same kinds of problems writers do. Like how do you generate fresh and innovative material for an audience that demands familiarity? How do you navigate things like promotion and publicity on a tiny budget? How do you work with similar artists in your genre or movement collectively without losing your own voice? These are questions I think most artists ask themselves these days, no matter what they produce. And to answer your question, the more I learn about how musicians I admire navigate these issues, the more I understand how to deal them myself. I think there’s some real value in stepping outside your genre to look for answers to these questions. It can give you a fresh perspective.

CW: Are there any recent artists or albums that have had this effect on you?

KT: I really admire this guy Lil Ugly Mane. He’s an underground hip hop guy who came up in this kind of weird horror rap scene a few years back–I think that was what they called it, “horror rap.” Lil Ugly Mane had this album Mista Thug Isolation, which I think is kind of his biggest success commercially. I wasn’t so crazy about that album exactly, but what really blew me away were the things he produced after. He made these long, half-instrumental, kind of crazy and completely singular lo-fi mix tapes I totally fell in love with. It started with a three part project called Three Sided Tape, which is really long and inconsistent but, listening to it, you really get a sense of this guy’s process. He’s made a lot of other things too, kind of similarly weird outsider stuff under various names. It’s difficult to learn about him, too, which adds to the mystery, the internet is where he got famous and there’s not much you can find out about him that’s really verifiable, even online.

I guess my point with all of this, regarding what I was saying before, is I like music where I can see an artist’s creative process working. It’s a window into that person’s mind that the listener can glimpse through, which is something I’m always on the lookout for when I’m listening to music. It’s what I loved about Cody Chesnutt’s The Headphone Masterpiece too. Or like last year Aphex Twin deleted his SoundCloud and made it into a single download. I loved that because you sort of see what he was working on day-to-day and you can get a sense of his process.

CW: How do you take what those artists do and bring it back around to your own work?

KT: When I write flash fiction that’s what I think about, like I’m creating this record of my creative process through time. A lot of it sucks or is irreparably flawed, but that’s fine with me. Life is so long and messy, I don’t think you can’t provide a real sense of it in a single unified work, no matter how carefully crafted it is, and sometimes I see something that’s really crafted and you can see this kind of artful, perfectly executed but artificial conceit. That’s how I felt about the Gucci [Mane] album from last year, Everybody Looking. I prefer his long and messy mixtapes. I don’t trust that shiny, slick, perfect looking (and maybe actually perfect) art because, you know, that’s not my experience of living.

CW: Getting a firsthand look into any creative process is always interesting, which is why I think I’ve always enjoyed when artists release demos too. You get this very imperfect work that’s the rawest form of the song. No backing band or studio tricks, just music straight from the artist’s brain to the listener’s ears.

That’s something you can’t really get away with in any other medium either. Unless you’re a big name author (or more likely a deceased one) and they publish some bonus stuff in an anniversary edition like they did with Hemingway’s A Farewell to Arms, for example.

KT: I have a hard time getting into demos. Mostly, I feel like I only have room in my heart for one version of a song, and if that version is a demo it’d better be one hell of a demo. Though there are some exceptions. A few years ago I heard the demo of Simon and Garfunkel’s “Poem on the Underground Wall” which I now consider the definitive version. I feel the same way about the demo version of the Pavement song “Major Leagues” and the Guided by Voices song “Teenage FBI,” but it’s rare.

KT: For lit, kind of the same thing. I’m not crazy about drafts or earlier versions or cobbled together posthumous works. Though I do like it when writers generate a lot of material and it all ends up in the same volume. So, I like Lydia Davis for the same reason I liked that Aphex Twin SoundCloud dump. She has so much material and it’s a great map of her creative process over the long term. Her book Collected Stories is easily one of my favorite volumes of fiction. Same with The Complete Works of Isaac Babel and the collection of Daniil Kharms poems and sketches Today I Wrote Nothing, which is, now that I think of it, a cobbled together posthumous work…so I guess even when I’m trying to be consistent I contradict myself. I find it pretty difficult to have unified options or theories about things in general for this reason. If I go deep enough into anything, I find discontinuity within my own thinking, which bothers me.

CW: That brings me back around to your writing. You and I have known each other for what? Three, four years now? I remember after a reading in Minneapolis, which was the first place we met in person after working together at BULL for several years, you said you write fiction in the style of how a person would tell a story to a friend. Familiar, conversational, grounded. Does that same philosophy still apply to how you approach writing these days?

KT: Yeah, I think it does. When I write I try to imagine my reader is in the room with me and I need to hold his or her interest. It keeps me away from gimmicky stuff mostly, and it’s a good reminder that all people want is a good story—something that’s clear and relatable and speaks to our lives. It’s easy to get distracted by all the frills and fancy bits of storytelling you learn about in an MFA. I don’t want to knock that stuff exactly, everything has its place, but for me, I value efficiency above most things. I’d rather get in and get out of a story as quickly as possible, like a green beret.