SOMETHING WORTH SAYING: A Conversation with Kara Vernor 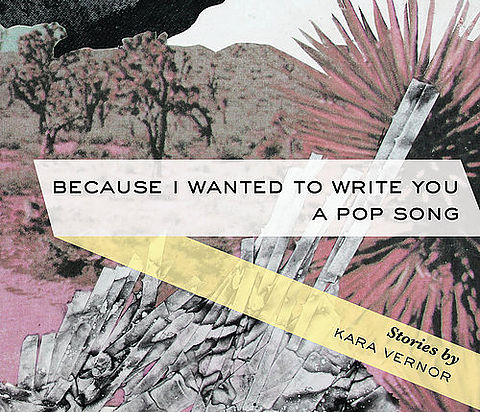 Kara Vernor is the author of Because I Wanted to Write You a Pop Song. She’s also one of my favorite writers working today. Read any story in her debut collection and you’ll want to memorize it like it’s your new favorite song. You’ll want to hit replay as soon as it’s over. You’ll want to share it with friends so they can sing along with you. If you’ve never read any of her work, allow me to get you started with this beauty.

I’ll give you a minute or so…

…well, was I right? Now you see what I mean. I recently had the chance to sit down with Kara and talk about how music has shaped both her writing and her life over the years. Please enjoy.

Christopher Wolford: When did music first enter your life in a big way?

Kara Vernor: I was in third grade when I asked for and received my first two albums: Toto IV and The Best of Blondie. So yeah, I guess in retrospect I was uncool and cool at the same time. In defense of my young tastes, I will say my interest in Toto petered quickly, while I played the snot out of that Blondie tape, choreographing my best Solid Gold dance moves to “Dreaming,” “Rip Her to Shreds,” and “Atomic.”

“Atomic” was my favorite song on the album. I loved the lyrics, “Your hair is beautiful/Oh tonight,” because they captured all the huge feelings I had for a boy in my class.

CW: What was the first record you bought?

KV: The fist vinyl I owned was a 45 of “Burning Down the House” by the Talking Heads, which now feels rightly symbolic. It was given to me for my 10th birthday, and I still have it, though I’ve lost the photo my dad snapped of me after I unwrapped it and held it up. I was in a purple, puffy-sleeved unicorn sweater, and I was grinning — pre-braces and bucktoothed. It would for sure be my forever author photo if I could find it.

CW: Before we dig into your most recent collection (and writing in general) tell me a little about how you bridge the gap between music and writing? I know you don’t listen to music while you write but are there certain artists/genres/etc. you tend to lift ideas from more than others?

KV: I borrow from the loud-soft-loud tendencies of ’90s indie rock. I played the drums for a while in indie bands in the ’90s and 2000s, so it’s in my body and muscle memory. It shows up most at the paragraph level in that I tend toward a series of “soft” sentences that are then capped with a “loud” statement. I also want my loud sentences, in particular, to read like hooks. I hope they’re powerful and simply stated enough to get stuck in the reader’s head. Without music and the repetition of a chorus, it’s a tall order, but that’s my goal.

I like the naked sentiment, earnestness, and accessibility of pop music, and I try to write stories that deliver in a similar manner. Stories that mistake opaqueness for hipness or sophistication make me yawn.

On a subconscious level, I find that certain lyrics and ideas turn up in what I write. The last sentence of one of my stories is, “Stay or go,” which harkens to The Clash’s “Should I Stay or Should I Go.” Another ends, “This house I am sitting in, burning,” which harkens to my first 45. More explicitly, I’ve quoted lyrics in the body of a story or in a story title.

CW: Re-reading the stories in Because I Wanted to Write You a Pop Song, it’s easy to see this pattern, and I mean that in a good way. From the get-go, each one creates a sense of place that feels strange, yet familiar enough to draw you in until the hook hits. Once that happens you can’t get it out of your head and it sticks with you for hours, days, weeks.

Does writing give you the same kind of rush playing music did? Does reading a story at an event have a similar feeling to playing songs live?

KV: Well that is kind of you to say. I can’t say writing gives me the same kind of rush that playing music did, but it’s a rush nonetheless. Steve Almond covers this well in his book Rock and Roll Will Save Your Life. And speaking of Steve Almond, have you read his takedown of Toto’s “Africa”? I don’t know if he or someone else first made the claim that all writers are failed musicians, but I wouldn’t argue with that.

For me, playing songs live was a special kind of rush because it happens with other people. There’s the group synchronicity plus the audience dynamics. Reading is thrilling and terrifying, too, but it lacks the camaraderie of performing with bandmates.

CW: Reading’s definitely its own type of performance art, but I agree that, compared to playing music, it’s night and day. With music, you command the room in ways you just can’t with a reading. You have a piece of paper in your hand, and maybe a microphone, but it’s just your voice and nothing else. Even a solo singer at an open mic has a guitar or piano to fill the empty space.

I kid you not, I nearly included that exact quote (“all writers are failed musicians”) as part of my last response but decided against it cause I couldn’t remember who said it. You may’ve solved the mystery. Steve Almond has always been one of those names floating around in a lot of music pieces I’ve read but I’ve never dug into his work. I’ll have to do that sometime soon.

KV: Too funny. I’m guessing Steve wasn’t the first to say it, but maybe he’s where I heard it first?

CW: Deconstructing songs is a fascinating exercise though. When you take a quirky hit like “Africa” and elevate it to new levels using humor and wit, it opens up a song in ways you didn’t think were possible. If it’s done well, it can permanently shape your opinion of a song. Have you ever deconstructed any pieces of music like this? If not, is it something you’d like to do someday? Any specific songs and/or albums you’d like to tackle?

KV: I’ve not deconstructed a song in that manner. The closest I’ve come is writing music-related lists or changing the lyrics of well known songs. I’ve submitted some of these pieces to McSweeney’s, but so far they’ve all been rejected. The last one I sent was titled The Mountain Goats’ “Cubs in Five” for Emerging Writers, and as the title suggests, I rewrote the lyrics from the perspective of a writer. Do you know this song?

CW: I do! I will admit, for the record, it took me awhile to get into the Mountain Goats. Just one of those acquired tastes, I think. Mostly his singing style. I never doubted Darnielle’s skills as a lyricist though. He just released his second novel too. Were you a fan of his first one?

KV: Yes, loved his first one. You?

CW: Same. His new one, Universal Harvester, is at the top of my to-read list too.

The musician-turned-novelist is one of the greatest things that can happen for a music fan. Instead of an album’s worth of lyrics you get 200+ pages worth of them. They might not rhyme but the voice is still there.

Do you think we’ll start to see more songwriters venture into the novel writing world? Any specific artists you’d like to read a book by?

KV: It seems like a lot of great lyricists turn to prose in their musical retirement. I’m thinking of Patti Smith, Elvis Costello, and Morrissey, etc., though most of what comes to mind are memoirs. There are so many musicians I’d love to read a book by: Courtney Barnett, Damien Jurado, Himanshu Suri and Victor Vazquez of Das Racist, Scott Hutchison of Frightened Rabbit, or Hurray for the Riff Raff’s Alynda Segarra. I’m sure they’d all write wildly different books but all with distinct voices and characters. I’d also love to see more books like Strange Fruit: The Biography of a Song written by the journalist David Margolick (with a foreword by Hilton Als). It’s an incredible book, and the approach, rather than focusing on a particular scene or personality, seems to allow for a broader examination of music’s place in our culture. It cuts more horizontally than vertically.

CW: I’m right there with you. I’d love to see what someone like Gillian Welch or Okkervil River’s Will Sheff could conjure up. The Decembrist’s Colin Meloy wrote a fantasy adventure series called Wildwood Chronicles with his wife Carson Ellis, and he actually recently announced a new novel. Hopefully with the success of artists like Darnielle and Meloy, more musicians will venture into that territory. A Courtney Barnett book would be all types of funny and fantastic. I’d pre-order that the first chance I got.

With that being said, what’s on the horizon for you as writer? You’ve released your debut album, what should we expect in round two?

KV: I’ve been slowly writing some flash pieces that are inspired by anonymous questions asked in middle and high school sex ed classes, which I sometimes teach. Some of the stories connect directly back to the questions and others connect by theme. They’re not erotica; I’d like to think of them as an adolescent version of the Netflix series Easy, just sort of vignettes of people navigating sexual expectations and cultural norms. My characters tend to navigate them poorly and with a lot of naïveté. I’m also experimenting with something longer, but I’m in the “we’ll see” phase with it. We’ll see if it turns into something worth talking about.

Like what you read? Support the writer, buy Kara’s book here.