Jason Brammer​ on the Art World

Jason, it’s a privilege to have you spend some time with Split Lip. What’s been going on?

Thanks for having me. Lately, I’ve been gearing up for a show at the University Club of Chicago, which is a private club on Michigan Ave. with a gallery overlooking Lake Michigan. It has a “Hogwarts” feel to it, with giant fireplaces and solid wood paneled walls. My show there is a mix of drawings and mixed media works. I made a new series of graphite drawings called Gateways specifically for this show that are loosely inspired by Tibetan mandalas and created hand painted frames for each one.

We also recently hosted an Open Studio Jamboree at my 3,000 sq. foot storefront space, which was “a hoot” as they say. We set up the space as a gallery for the night, brought in a DJ, and went through 3 kegs. I just created a concert poster image for Todd Rundgren and have a couple pieces in a group show at La Luz De Jesus Gallery in Los Angeles.

How did your world of art begin? Tell me, were you one of those kids in sixth grade who fascinated everybody with drawings of action figures? Be honest. 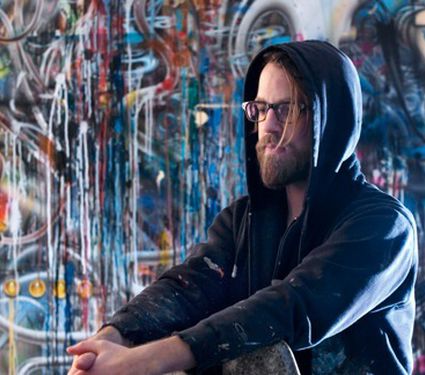 My world of art began very early on because my mom is an artist and encouraged my creative endeavors from the beginning. When I was in sixth grade, I remember drawing boom boxes, MTV logos and tons of Powell & Peralta skateboard graphics. In high school, my art teacher, Glenn Litts, introduced me to airbrushing and I set up a little area in my bedroom where I could airbrush. My dad drilled a hole in the wall and ran a cable to the garage that hooked into the compressor, because it was this giant Sears machine that was pretty loud.​

I noticed your education mentioned in your biography, but it states most of your work has evolved from independent practice and experimentation. What are your thoughts on modern fine art academia?

I have a lot of thoughts on this subject. I would start by saying that the Art World is huge and there are many different approaches to what is considered “art”. An art education can be an invaluable experience for some, but for others, it can be a hindrance. I would think long and hard about going to art school if you’re contemplating it because, if money is an issue for you and you need loans, do you want to start out your professional career as an artist with an $80,000 debt? Did you learn skills that will generate that kind of money?

I was super undisciplined in college and dropped out of school so I could travel around on tour with the rock band Old Pike, and we were eventually signed to Sony 550 records in the late 90’s. At age 23, it was more fun playing rock shows in NYC than drawing a still life of a pear. I wouldn’t go into art school thinking it’s some easy way to avoid higher math. If you have ambitions about being a working artist, try working on your craft for 8-10 hours a day for a month or so and see how you feel. If it doesn’t feel like something you want to do for the rest of your life, maybe it isn’t for you. I think some people who call themselves “artists” lack direction and motivation, confusing shiftlessness for creativity. Many of these people find themselves in art school, where they enable one another. For me, there was a disparity from the “idea” of working in the arts to the “reality” of an artistic career. It took me many years to develop a work ethic that allowed me to grow and produce what I’m doing now. Read Art School Confidential by Terry Zwigoff and the “12 Moments in the Life of an Artist” story from Me Talk Pretty One Day by David Sedaris for some funny takes on higher education. Also read Steven Pressfield’s The War of Art as a manual for how to cultivate discipline and creativity.

You are well commissioned, collected and published. I was especially impressed with your LinkedIn commission, The World’s Axis. The project was put together with rather unique media like a salvaged tabletop, plaster, antique hardware and acrylic paint. Would you mind discussing the creative process for that installation?

I had actually done another installation for LinkedIn in one of their conference rooms and they subsequently moved into a larger space and asked me to create something for their new digs. One of their main guys has been collecting my work for several years and we discussed doing an installation inspired by a painting from my Axis Mundi series, which means “the world’s axis”.  (You can read more about this concept on my website under the Axis Mundi section). I basically started with a tabletop, attached wood cut outs, and painted the surface to give the illusion that it’s a folding plane with atoms spiraling out of the center and onto the wall. The wall was about 30 feet long and we mapped out an array of wooden spheres on long sheets of paper in my studio to establish the network pattern on either side of the painting. 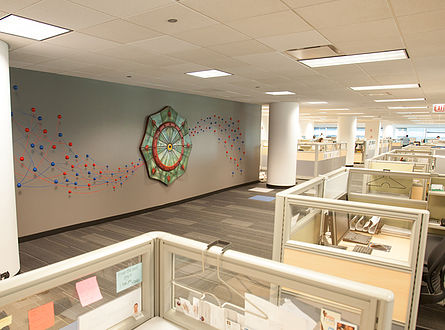 Interior view of “The World’s Axis” at the offices of LinkedIn.

I’ve noticed other installations included other found materials like hoses, pipe, tubes and wire. Do you see these objects and ask “I wonder what will happen if…?” or do you say “I know what I can use this for.”

​Both thoughts occur at different times, depending on the object. Sometimes I need to go and find something particular. For example, last week, I went to a salvage store to pick up a pair of brass handles for a new piece. I actually have people who know my aesthetic and scout objects out for me too, so I have a large inventory of parts to choose from. My favorite thing is to find objects in the alley by my studio, like old headboards and frames. It’s amazing what people put out in the alley as trash.

How’s summer looking for you? Any exhibitions or big projects in queue?

Summer is looking good and I have a solo show coming up at Adventureland Gallery here in Chicago, which opens on June 7th. This show will be primarily works on paper and will showcase India ink and watercolor drawings from my Creatures of the Deep series. These pieces are influenced by bestiaries from the Middle Ages, which are collections of representations of mythological creatures. I paint these pieces to look as if they are old and water damaged manuscripts from a lost era.

I may also be working on a second phase of an installation I did for Dark Matter Coffee, called the Dark Matter Machine. In the first phases of the project, I transformed their coffee roasting room into the interior of a psychedelic, steampunk-inspired submarine producing the “dark matter” of the universe.​

​I’ll get out of your hair now, but please let me ask — If you came up in conversation a decade ago, the first things to come to mind would be Old Pike and Planet Earth. Believe it or not I have Jay’s Friends loaded on my iPod and, since I keep my music on shuffle at home, Planet Earth comes up quite often. Two things real quick: Do you still take part in the music world? And, please tell me you still have the mighty white Westone.

​That’s hilarious. I’m glad that someone’s still rocking Planet Earth. I may need to dig my copy out of the attic. That was probably our best recorded effort and it’s actually not that bad, especially considering we were all in high school. I was playing music (with Cameron McGill & What Army) in Chicago for several years, but finally severed my musical ties about 5 or 6 years ago to pursue the paints full time. I need to be able to fully obsess on my work without any other obligations. For me, a steady diet of hot yoga, meditation, and working is about all I have time for anymore. As far as the mighty white Westone, it is so long gone. I left it in a basement in Bloomington when I was jamming with the guys from the Early Day Miners and they moved. Oh well. It had a good run. It was a good lesson in non-attachment.

Thanks again, Jason, for hanging with us for a bit. We look forward to hearing more about your career down the road.

​Thanks again for having me. All the best.